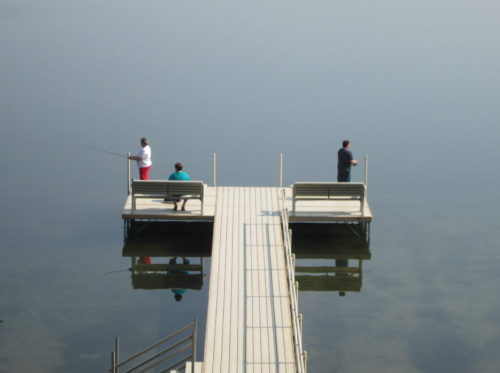 Camp Bliss is located on three lakes that are perfect for fishing; Long Lake, Fourth Lake and Third Lake. Camp Bliss offers year-round fishing. Our lakes are home to walleye, northern pike, yellow perch, largemouth bass, rock bass, bluegill, sunfish and more. Winter weather doesn’t keep us indoors. Enjoy a day on the ice in comfort renting a fish house from nearby Walker or bring your own. End your day in the warmth of our rustic Lodge or elegant Bliss House. If you venture outside of Camp Bliss in search of new fishing holes, visit nearby Leech Lake, the third largest lake in Minnesota. Leech Lake is fed by multiple rivers and is bordered by the Chippewa National Forest. Book a guided fishing charter for a lifetime experience! Your adventure is calling!

“My son Brendon, at the ripe old age of five, was ready for his first day of fishing. He was well prepared after watching “Shark Week” on TV knowing all the secrets to catch the “big one”. He got up at the crack of dawn preparing his secret “chum” out of cereal and gummy worms, taste testing as it was mixed. I passed on the gummy worm chum for a granola bar and coffee. We gathered up the bagged lunches Mommy packed and headed out to the boat. It was a beautiful morning – just right for fishing. The tangled line didn’t slow down his practice casts; after about 50, he finally got the line maybe two feet from the boat. Knowing we were here for the long haul, I settled back in coffee bliss. Before I even got my feet propped up, Brendon’s two-inch bobber took a dip throwing him into a squeal of delight, “it’s a shark!” With a smile, I started to explain the fine art of waiting for the bobber to bounce back down when it took off at top speed under the water and headed to the far end of the lake. He was dragging on the line as I tried to grab him, the pole, the chum, our lunch and all the worms to make sure he or our supplies weren’t dragged out to sea. He slowly brought in the line with each turn of the reel which seemed to take hours. I grabbed the net not sure what he had as he continued to scream – “It’s a shark!” As he pulled his catch up to the side of the boat, to our surprise he had a whopper – a northern pike that weighed in just over 15 pounds. This fish story grows with each new version he tells. His first catch has grown to the size of a 400-pound shark. We will definitely be back to Camp Bliss for more shark fishing next year.” Francis, Brendon and the shark!

Fish Story – The First Fish I Meet Face to Face

“I had never gone fishing. In fact, I never thought of going fishing. My independent living specialist (ILS) recommended a fishing retreat for me. I was afraid but wanted to go. It took me a year to save up the money, but the day finally came in the middle of winter at the “Ice Fishing for All Retreat.” I was dropped off at Camp Bliss. At the crack of dawn, I was given a pole and bait. The bait was squishy, slimy, squiggly, and warm – I was told perfectly for hungry fish. We settled into groups in our warm fish house exploring each corner as well as the fish holes. I was taught how to bait the hook, but my fishing partner took over the baiting the hook thing! I dropped the line and sat. We sat. Then we sat some more. After about five minutes, my pole jerked. Did I feel a tug? I think so, maybe not. Yep, there it was again. With my fishing partner near my side, I got one! After some tugging and almost dropping my pole, I was able to bring one in. It was massive – almost 2 pounds I was told. I ran my hands over its body – he was cold and taking gasps of air. My fishing partner carefully removed the hook. I felt his mouth, gills, tail, and fins. He was beautiful. I was told my big catch was too small to keep which still makes me smile. This fish, my adventure, is one I will never forget and am ready to relive each year at Camp Bliss. I am blind but got to see the most beautiful fish in the lake.” Renee

Fish Story – The Northern and the WHALE

“Vietnam vets ice fishing weekend there were bets going down on who would catch the most, the first and the biggest fish. The troops were getting pretty excited about the bets. After a day of fishing, there were two claims to being the biggest fish. The two trophies were weighed in with the northern winning. By the time we got back to the lodge, the story of our catch was presented – it was a 10 pound northern and a 15-pound crappie!! By dinner, the northern was up to 25 pounds and the crappie was on its way to 45 pounds. As the night fell, the northern had morphed into a 60 pounder and the crappie had grown to a 6000-pound whale! The real weights remain a secret with only me – paid off to keep quiet!” Mike M.

Fish Story – The Boat versus the Dock?

“It was sprinkling when a bunch of us headed out on the lake on the fancy pontoon. We had a great laugh as we left the “too sleepy to get out of bed” people with only one option – fish from the dock. It took us a while to catch anything, but once one guy was able to, we all started bringing the fish in. We were so proud of all the fish we had caught as we brought the pontoon back in ready to show off our huge catch. That is until we noticed that the people who stayed to fish off the dock had caught way more fish than all of us “pontoon people” combined! Afterward, we found out that it didn’t matter – the fish from the pontoon or the fish from the dock made a great dinner!” Eric W.

“The day was almost over. The sky had faded past orange into red. And I still hadn’t caught anything. My wife had a full stringer, and my buddy and his wife had caught enough for a fish fry. Everybody else in the boat was ready to head back to shore. I kept my line in the water while everyone else reeled theirs in. I focused on my bobber, waiting for it to bounce. Just a little. Just enough to show I’d caught the passing interest of one fish. My buddy slapped me on the back and suggested that maybe fishing wasn’t my thing. My wife fired up the motor and whistled at me. When I turned to look, she smiled and made a reeling motion with her hands, indicating that it was time to go. She loves it when I get skunked. Competition drives our marriage. The bobber dipped when I started reeling, as expected. But then it disappeared under the water. Not far, but deep enough to get me up on my feet. I squealed with joy and my wife cut the engine. I saw what was coming and called for the net. My buddy grabbed it, but after looking over the side, traded it for the little net we use to pull minnows from the bait bucket. I pulled my fish up and he caught it in the little net. Everybody’s cheers turned to laughter. The fish was barely longer than my finger. The tackle I used to catch it weighed more. That fish was a “keeper”. Had it stuffed and mounted on a stick of driftwood we found on shore. It holds a place of honor on our living room wall, just a few inches away from the open mouth of the seven-pound, largemouth bass my wife caught earlier that day.”

Camp Bliss is an incredible retreat and vacation destination in Walker, Minnesota.

Nestled on 48 acres of stately pines between 3 scenic lakes.